When it comes to leak testing, Penflex uses one or both of the following methods.

In the case of hoses designed to transfer gas made from molecules smaller than air, we need a testing method capable of detecting smaller leaks. Hoses which have an application in the cryogenic industry fit into this category.

Capable of detecting leaks as small as 10E-9 cubic centimeters per second (std cc/sec)—whereby it would take a year and a half for one bubble to escape under water—a mass spectrometer test using helium gas is a common requirement for these hoses. Mass spectrometer testing is the most accurate way to identify leakage.

In comparison, and in accordance with international standard ISO 10380 for corrugated hose, the leak rate that air-underwater and hydrostatic testing will capture is .001 std cc/sec.

First developed as part of the Manhattan Project during World War II, mass spectrometer testing relies on a sealed vacuum chamber filled with helium. If helium leaks out of the chamber, the machine will detect the leakage and assess the size of the leak.

When testing a hose, we first need to vent and calibrate the system. We then load the hose assembly into the chamber, connecting it with the inlet of the mass spectrometer machine. Once we have a good seal, we begin the testing process.

Through a series of pumps, the machine pulls a vacuum inside the hose. Once the displayed leak rate reduces to the required testing level, using the hood or the outside-in method, we spray the helium inside the chamber for a couple of seconds until helium saturates the outer dimension of the hose. 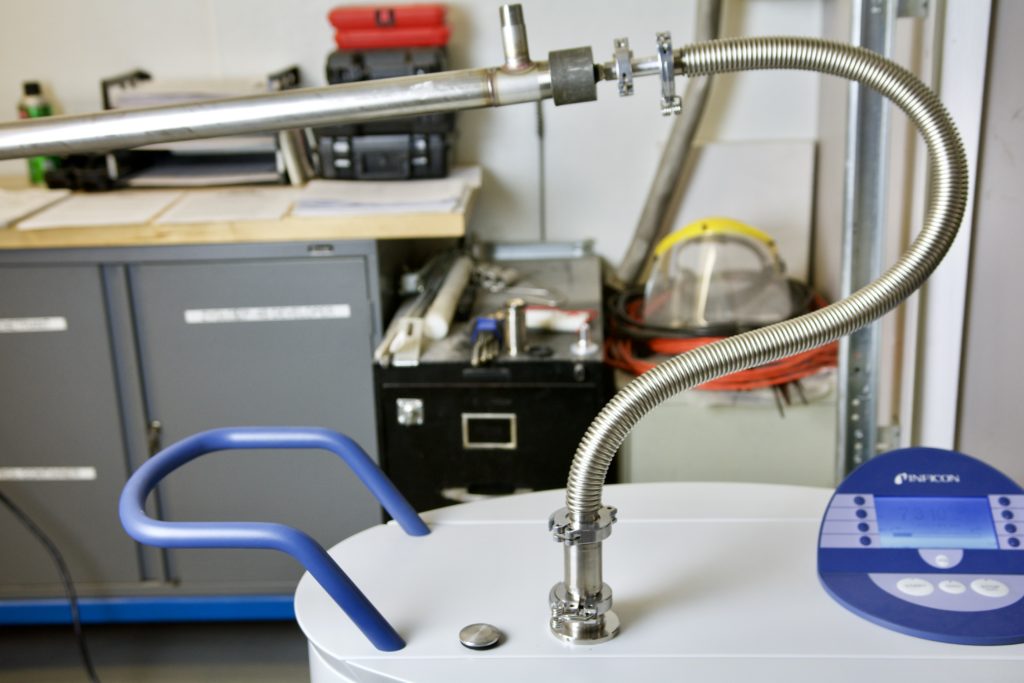 Helium is used as the tracer gas because its atoms are among the smallest. They can thus penetrate small leaks quickly. We record the fluctuation in leak rate to determine whether any potential leakage is present. As a policy, we sustain the hose in a helium rich environment for five minutes.

With the recorded values, we draw up a certificate showing that the hose assembly passes the mass spectrometer test.

Ronit Patil, Penflex sales engineer, discusses the process for testing hoses using a mass spectrometer in the video below.

If you have any questions about helium mass spectrometer testing or about how Penflex hose assemblies are used in cryogenic applications, please contact us.