When to Fret about Fretting Corrosion

What is Fretting Corrosion?

Fretting corrosion refers to the damage of uneven material surfaces in contact with one another. These uneven surfaces, also known as asperities, appear to be smooth but a microscope would reveal their sharp grooves and rough pits.

Fretting is caused by oscillatory slip and rapid repeated motion that causes contact between the two surfaces. While the surfaces are often not designed to touch, even the slightest amount of contact—for instance, an amplitude of motion as little as 3×10-9m—could eventually lead to fretting corrosion.

This contact can be caused by vibration under a load or pressure fluctuations in tight-fitting parts. Within the hose industry, we often see fretting corrosion on the hose as a result of constant contact with the braid.

A Word About the Term “Corrosion”

Strictly speaking, corrosion is meant to refer to damage caused by chemical attack. Fretting corrosion is therefore, at its most basic, mechanical damage.

However, as the two surfaces rub against one another, fresh surfaces become exposed. Oxidation occurs and oxide debris soon forms. In stainless steel, iron oxide can develop, which lends a reddish color to the area affected. The image below shows fretting on a material. 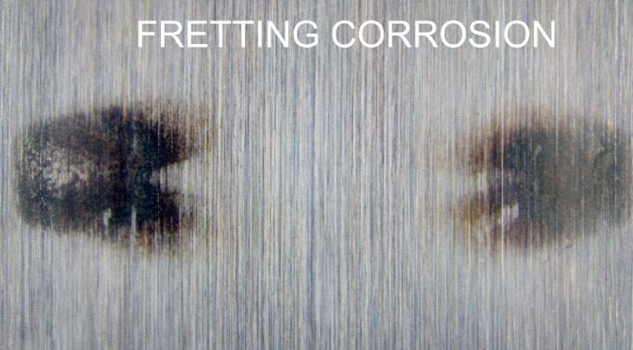 A Word on “Braid Wear”

Depending on the material or application used, fretting can have abrasive wear, adhesive wear, or both. Abrasive wear occurs when a surface slides across another surface, the former having a rougher surface than the latter. This causes material loss on the softer surface. Adhesive wear occurs during direct frictional contact whereby both surfaces begin to lose material fragments. This type of wear can increase roughness and create protrusions. Since the fragments cannot escape contact during fretting, they further contribute to wear.

When it comes to metal hose, we might also refer to fretting corrosion as “braid wear” as the relative movement between the braid and hose is an example of abrasive wear. The tensile strength of the braid material is higher than that of the hose material—about 100 ksi versus 75 ksi—and thus the hose is “sawed-into” by the stronger wire which acts like a little knife. The image below shows an example of braid wear. 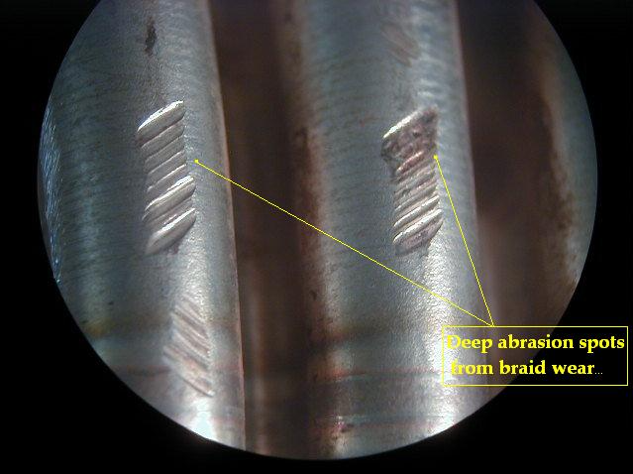 Like many other types corrosion and wear, the degree of severity on the material(s) depends on many factors including contact load, amplitude, temperature, relative humidity, and inertness of the material(s).

How to Reduce Fretting Corrosion

Beyond movement, the outside environment plays a significant role in the rate of fretting corrosion and must be taken into consideration when designing an assembly. For example, in humid conditions, the wear becomes less severe due to the moisture acting as a layer of protective lubricating film.

Ultimately though, it’s regular maintenance and routine material inspections that will defend against corrosion of all types—including fretting—and increase the life span of a hose in service.

For any questions on this bulletin, please reach out and contact us.